The USA Continues To Import Record Volumes of Silver by SRSrocco

The USGS reported a huge 33% increase of U.S. silver imports in December versus November:

The U.S. Continues To Import Record Volumes Of Silver

According the most recent official data, the U.S. continues to import record volumes of silver.  This is quite interesting because retail physical silver investment and industrial demand dropped off toward the end of the year.

After the huge spike in physical silver investment from July to September, demand cooled down in October and November.  Thus, silver imports into the United States also declined during those months.  However, something changed in December.

The USGS reported a huge 33% increase of U.S. silver imports in December versus November: 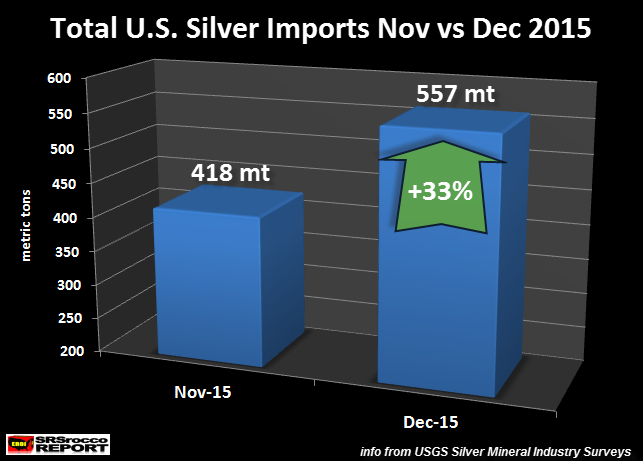 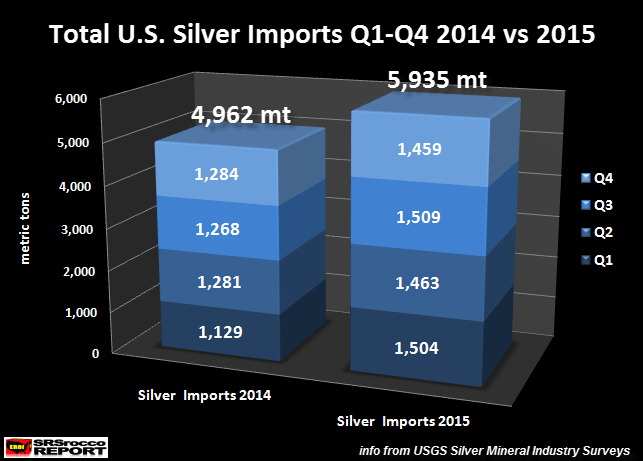 Again, why would silver imports surge in December, if physical investment and industrial demand was lower.  I believe there are large entities acquiring silver off the radar.  Hell, the Comex silver inventories declined in December.  So, there was no need for additional silver imports to supply the Comex Exchange.

This leads me to believe someone with BIG POCKETS are acquiring silver while the market is lulled to sleep.  With the huge spike in physical gold and silver buying yesterday as the prices surged 5%, it looks like 2016 could turn out to be quite an interesting year.  I wouldn’t be surprised to finally see the avalanche of buying that will totally overrun the precious metal markets.

If the United States had to import 72% of its silver last year to meet consumption, what happens when the world starts buying silver to protect their wealth?  There just won’t be enough silver to go around.  The day when the market price of silver goes over $100 with no sellers is coming.

Please check back for new articles and updates at the SRSrocco Report.  You can also follow us at Twitter below: